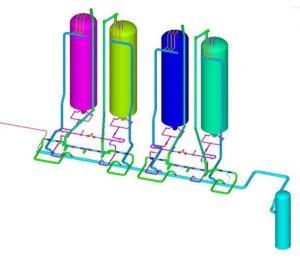 General Layout of the Coke Drums and the Associated Blowdown System

IR thermal images of the blowdown header were taken during operation to assess the temperature distribution in the piping. Thermocouples were also installed to record the temperature of the blowdown header at different locations. Based on the thermal images and thermocouple readings, it was determined that a significant temperature gradient was present in the circumferential direction of the header at various stages of the operating cycle. 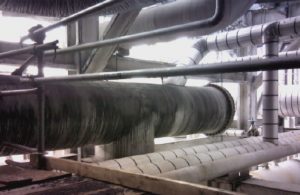 The crack-like-flaws were observed during routine inspection. Two holes were drilled through the header at the ends of the crack to arrest future crack propagation. This was done in preparation for clamp installation. When the holes were drilled, a significant amount of liquid hydrocarbon drained from the header. This indicated that a pool of residual liquid hydrocarbon remained in the pipe, and had not properly drained from this location. This residual liquid was determined to have a significant effect on the life expectancy of the blowdown header. 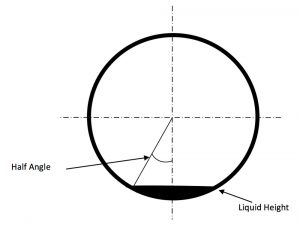 Representation of the Liquid Hydrocarbon Pooling in the Blowdown Header

The blowdown system was analyzed using Computational Fluid Dynamics (CFD), Finite Element Analysis (FEA), and pipe stress analysis. The boundary conditions used for the analyses were provided by the customer for a typical operating cycle. An operating cycle was defined as each of the four Coke drums filling, quenching, draining, and drilling. 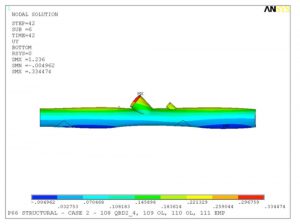 The following analyses were performed:

Thermal stress analyses of the blowdown header were performed using ANSYS® Finite Element Analysis (FEA) software. A Three-Dimensional (3-D) Finite Element Model (FEM) was developed to perform the analyses. All parts of the hydrocarbon blowdown system were included in the FEM. The element type used for each major component in the model is described below. The element types are provided for both the thermal and structural analyses that were performed.