Stress Analysis of a Furnace Stack Due to Over-Heating

The scope of this analysis was to perform thermal and structural analyses of the furnace under their operating conditions. A three dimensional Finite Element Model (FEM) of the furnace was constructed and analyzed to verify the stress levels. 2015 ASME Section VIII, Division 2, Part 5 was used as a guide to perform the analyses.

The thermal model included all the relevant components required for the complete thermal stress analysis. The convection coefficients were applied to the interior and exterior surfaces of the components. An initial analysis indicated the radiation effects were substantial compared to the convective heat transfer coefficients. Therefore, surface to ambient and surface to surface radiation phenomenon was also considered to achieve the desired temperatures on the cooling jacket as reported in the field data. The temperature distribution resulting from these thermal analyses were then used in the structural analysis as body loads. Structural Finite Element Analyses (FEA) was performed using the load combinations prescribed in ASME Section VIII, Division 2, Part 5 to determine the stresses in the vessel.

General Layout of the Furnace 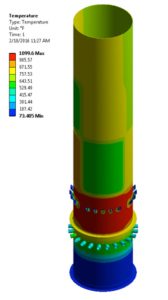 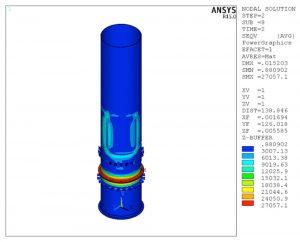 Residual Stress Distribution in the Furnace After Cooldown