FEA Analysis of a Round Reformer with 4 Pulsating Gas Heaters

Finite Element Analysis (FEA) was performed on a vertical reformer. Shell elements were used to model the reformer body and the attached nozzles. Static analysis was performed considering the operating pressure and temperature of the reformer, the usage of different thickness and material for construction. The effects of wind, seismic, and gravity loadings were also considered in the FEA. After determining the adequacy of the design, based on ASME Section VIII, Division 1 and Division 2, modal analyses were performed to determine the natural frequencies and mode shapes of the structure. Subsequently, harmonic analysis was performed to evaluate the effect of dynamic loads during the operation of the reformer. Coupled thermal-structural analysis was also performed to assess the effects of thermal stresses on the nozzles with high temperature gradients. 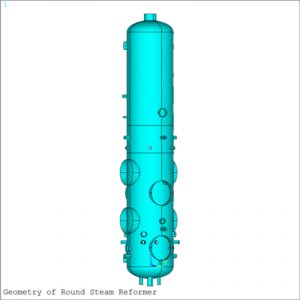 Geometry of the vertical steam reformer – The Finite Element Model (FEM) is meshed using ANSYS 4 node “shell181” elements with 6 degrees of freedom at each node (3 rotational and 3 translational degrees of freedom). 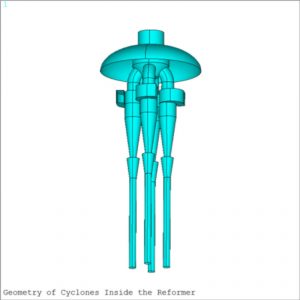 Four cyclones were also considered in the FEM and connected to the inside of the top head. 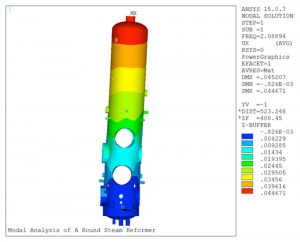 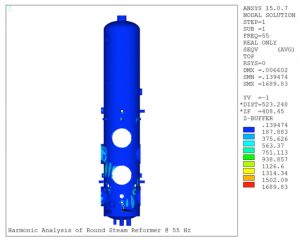 The figure shows harmonic analysis performed on the round reformer at 55 Hz. The dynamic loads applied at this frequency range were related to the vibrations in the heaters. The maximum Von Mises stresses caused by these dynamic loads are observed around the heater elevations. 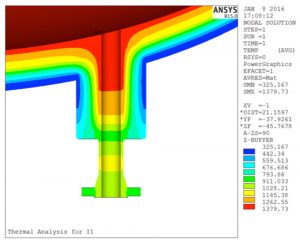 The figure shows thermal analysis performed on one of the nozzles at the bottom of the reformer, which has an inside temperature of 1400°F. Based on the refractory setup inside the nozzle and reformer shell, and the conductivity properties of different materials in that location, the temperature decreases to approximately 350°F at the reformer-nozzle junction.