A nozzle and a portion of the vessel head were exposed to a hot spot during methane operations of a gasifier. Although there were no temperature readings at the time of the hot spot formation, the customer estimated the temperature of the hot spot region to be ~ 603°F based on the paint discoloration at the hot spot location. Thermal Finite Element Analyses (FEA) was performed in order to determine the temperature gradients between the hot spot and the rest of the model in the meridian directions, through the thickness of the head, and the corresponding nozzles. The resulting temperature profiles were used in the structural FEA to determine the formation of residual stress in the model and to verify the adequacy of the nozzles, nozzle junctions, and the head for future operation of the gasifier. The analyses were performed per API 579-1/ASME FFS-1.

The customer performed Non-Destructive Examination (NDE) to ensure there were no permanent deformations, cracks, or material deterioration at the vicinity of the hot spot. 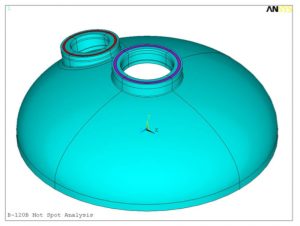 Geometry of the Head and Nozzle Penetrations 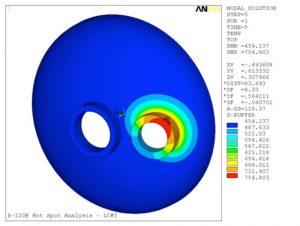 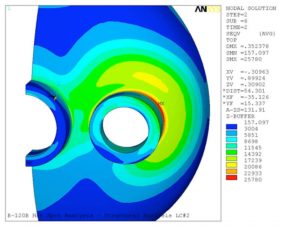