Fitness for Service (FFS) analyses were performed on a portion of Distilling Piping utilizing Finite Element Analysis (FEA). A model of the piping system was created using shell elements. The boundary conditions obtained from Caesar II piping analysis for the remainder of the piping system were applied to the termination points of the finite element model. The structural integrity of the piping, under the operating conditions, was verified by performing FEA per API 579-1/ASME FFS-1. 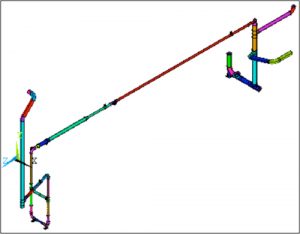